Users can upload, perview, manage and explore datasets in TIM Studio. Users will be able to leverage TIM’s time-series database, and TIM Studio will give users an overview of metadata and statistics that might be relevant in the data exploration and preparation phase.

The repository also includes version management, so you can keep track of your version history and update your datasets as new data becomes available.

In the datasets overview, a user will find a list of all the datasets they have access to. Relevant metadata - such as the workspace a dataset belongs to, the number of observations in the latest version and the variables it contains, the (estimated) sampling period, the last timestamp of the latest version and when it was last updated - can be seen directly from this overview.

The dataset in detail​

In a dataset's detail page, all of the information regarding the dataset can be found. This includes the name, the description, when it was created and when it was last updated, the estimated sampling period, the number of observations and variables it contains and how many (and which) versions of this dataset exist. The page also contains a detailed graph and table, enabling users to explore the data itself in detail. Users can find an overview of the dataset's statistics, including relevant information for each of the variables (minimum, maximum and average values, as well as the amount of missing observations). To quickly navigate to where the dataset is used in the structure of the TIM repository, the page also shows the use cases that center around it. 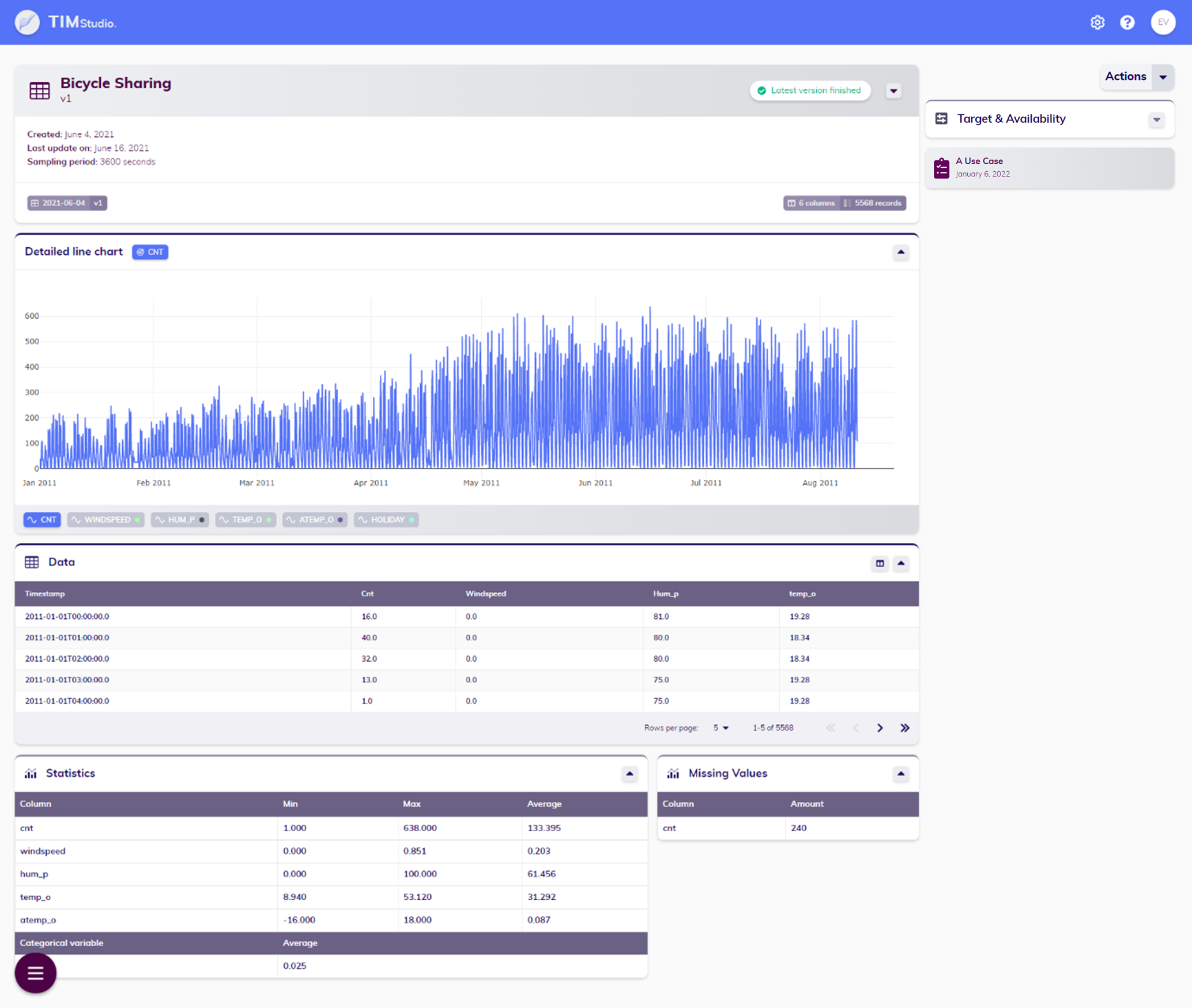 The version pills in the title card give an overview of the available versions of the dataset and their status. These pills are also clickable (when the status is finished or finished with warning), and clicking them will update the page with the data and statistics of the selected version.

The card titled Target & Availability displays the availability of all variables in the dataset relative to that of the target. To view the overview of availabilities that's relevant to a specific use case, the user can select the desired version of the dataset and the intended target variable in this card. Following this, TIM Studio automatically determines an appropriate scale for looking at the availabilities (in the example image below, the scale is set to Days even though the dataset is sampled hourly); it is however possible to manually adjust this to a user's specific needs. 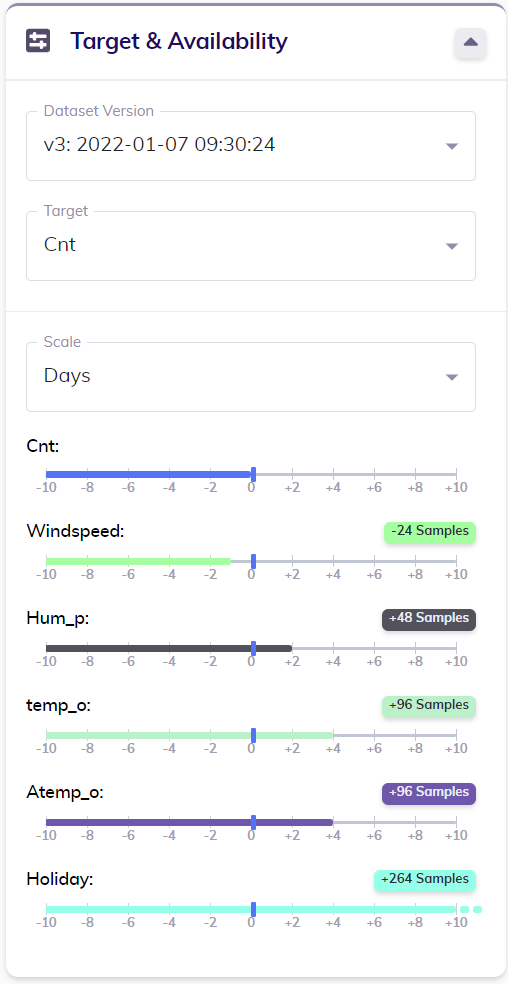 TIM makes it possible to adjust these settings, and scale and aggregate the data to the specific needs of the challenge a user is focusing on. A potential use case here can be found in sales data, where sales may be measured hourly, but a daily forecast is desired; scaling the data to a daily frequency while aggregation by summation before starting the forecast would achieve this.

Apart from timescale and aggregation, this menu also allows setting the imputation: i.e. are missing observations filled in and if so, how. It is possible to set the imputation type to Linear, LOCF (last observation carried forward) and None, the length can be set by specifying the maximal number of successive samples that should be imputed (this is not applicable for type None). By default, a linear imputation with a maximal length of 6 samples is applied. 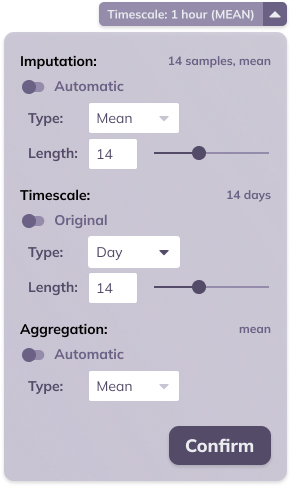 Using the view mode menu allows a user to switch view modes, ex.g. to navigate to the Operations view mode. Doing so brings up an overview of the history of this dataset, in other words all operations that happened related to the dataset. 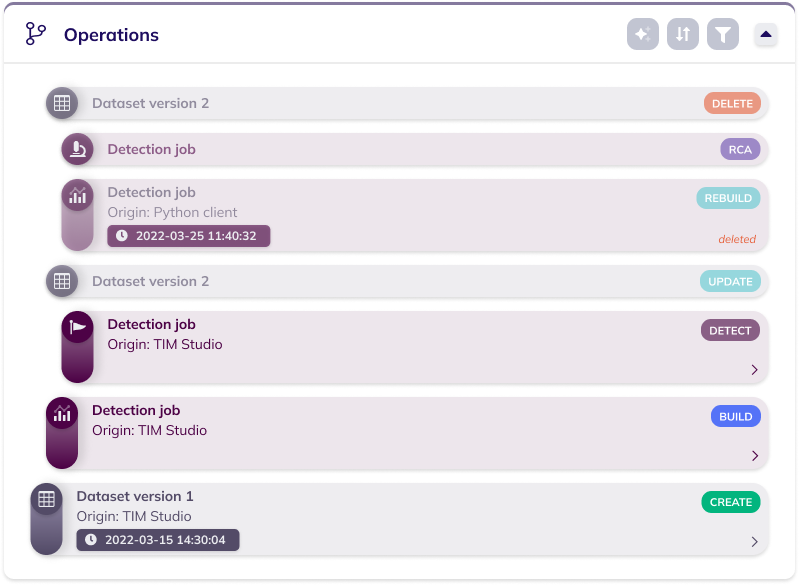 The operations card also contains a set of action buttons that can be used to manipulate the way in which the operations are shown. The sections below explain the possibilities of each of these actions.

When one or both of these options are selected, hovering an operation will bring forward that operation's relation(s) of choice, as shown in the image below. 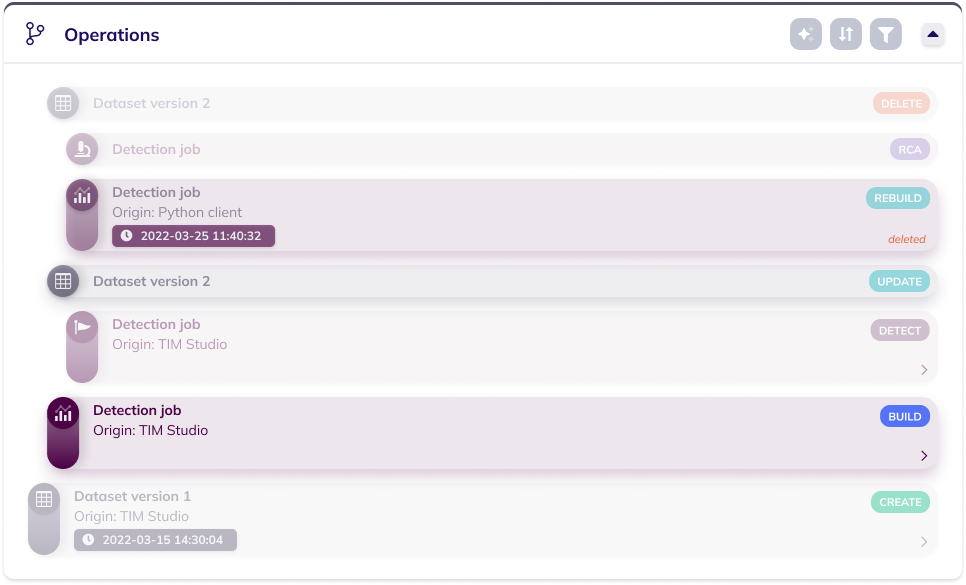